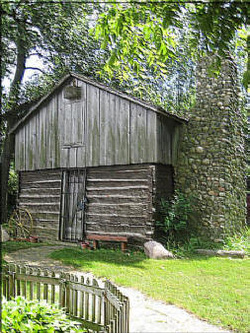 "Oldest log cabin in the Calumet Area"
It was in 1979 that the real log cabin was discovered under two layers of siding on River Oaks Drive near Burnham Avenue.  The log cabin almost could have been torn down to build a mini-mall.

That was all the incentive needed to get the members of the Calumet City Historical Society interested.  The cabin owner, Mrs. Evelyn Jackson, granddaughter of Peter Nicolaus Schrum, donated the building to the Society. The cabin was dismantled, logs and boards were numbered, and stored in the city garage for one-and-a-half years.  Later, the Park District donated a section of Veterans Park to the Society, and work began to rebuild the cabin with the help of many interested members and friends who donated many hours of their time.  The project was finished with the generous contributions of local businesses and individuals.

Today, the cabin stands surrounded by trees, nestled on the banks of the Little Calumet River, half a block west of Burnham Avenue just off Heritage Drive (166th Street).

Thomas Agge Schrum, a widower, and his son, Peter Nicholas Schrum, applied for papers sailing from Hamburg, Germany, to America in 1860.  Peter Nicolaus had a wife and child.  Their departure was delayed on account of the Civil War in the United States.  They were farmers and came to America to find work.  They came to Chicago, where Thomas Agge bought land from Owen McFarland and came to live in Globe, Illinois.

There is no record if the log cabin, which was the first part of their home, was there originally or if the Schrum family built it.  According to Wilburt Hasbrouck, a well-known preservationist-architect that the Calumet City Historical Society contacted, estimated that the lower part of the log cabin was built in the 1830s, and judging from the saw marks, the upper portion of the cabin was built in the 1860s.  A recent historian estimates that ca. 1840, it was constructed during land transfers. Decedents of the Schrum family say their family arrived in the mid-1860s.  The lower room (a pen) was a kitchen-living room, and the upper level was for sleeping and reached by a ladder.  Later on, additions were added as the family grew.  One of the additions on the west side was for bedrooms, and another on the north was a large front room.

One of Peter Nicoulaus' sons, Thomas Henry, tore the old home down in 1929, saving the original log cabin and had it moved to the east of his house, where it remained until it came to the attention of the Society.
Powered by